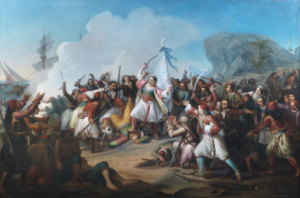 “Through the Pen of Others: Nineteenth-Century Views of Revolutionary Greece”

Revolutionary Greece embodied humanist values for many foreigners throughout the 19th century, a time in which the ideals of independence, freedom, self-determination and solidarity were gaining ground in Europe. From the destruction of Souli in Epirus and the 1821 Revolution, to the Cretan Revolt and the 1897 Greco-Turkish war, the Greek struggle inspired many foreign writers, artists, musicians and playwrights and even generated fashion, influencing popular and material culture. The European and international press recorded and analysed the dramatic events, profiled the protagonists and shaped the perception of the Greek national cause, even as political opinion may have been sceptical or at times hostile.

Greece became the place where imagination and politics met, a dreamlike and often contradictory land of revolution that defined the pen of others and their views of the central issues of the nineteenth century, such as freedom and bondage, revolution and colonialism, Empire and the Orient. The consolidation of the classical ideal, together with the movements of Romanticism and Philhellenism, shaped the image of revolutionary Greece as guarantor of its own and Europe’s enlightened past, which in turn clashed with its present reality.

This conference aims to expand both our knowledge of the reception of revolutionary Greece in the nineteenth century and the ways in which it contributed to the formation of a national “character” and political and cultural stereotypes that may still be at play two centuries later.

Submission deadline: 31 December 2020. A title, an abstract of no more than 300 words and a short biographical note should be sent to: 200etielladaFLSekpa@phil.uoa.gr

The conference will take place from 8 to 11 December 2021 at the central building of the National and Kapodistrian University of Athens (30 Panepistimiou Street).