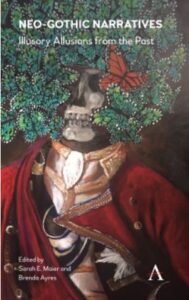 Illusory Allusions from the Past

Recent years have seen the strong development of Neo-Victorian studies, including its theorisation by such scholars as Cora Kaplan, Sally Shuttleworth, Ann Heilmann, Christian Gutleben, Marie-Louise Kohlke, Mark Llewellyn and others. It is a focus that has engaged literary critics from around the globe like Carmen Veronica Borbély (Romania), Susanne Gruß (Germany), Tiffany Gagliardi Trotman (Spain), Hitomi Nakatani (Japan), Agnieszka Matysiak (Poland), Max Duperray (France), Jeanne Ellis (South Africa) and Van Leavenworth (Sweden) to name just a few. [NP] ‘Neo-Gothic Narratives’ defines and theorizes what, exactly, qualifies as such a text, what mobilises the employment of the Gothic to speak to our own times, whether nostalgia plays a role and whether there is room for humour besides the sobriety and horror in these narratives across various media. What attracts us to the Gothic that makes us want to resurrect, reinvent, echo it? Why do we let the Gothic redefine us? Why do we let it haunt us? Does it speak to us through intertexuality, self-reflectivity, metafiction, immersion, affect? Are we reclaiming the history of women and other subalterns in the Gothic that had been denied in other forms of history? Are we revisiting the trauma of English colonisation and seeking national identity? Or are we simply tourists who enjoy cruising through the otherworld? The essays in this volume investigate both the readerly experience of Neo-Gothic narratives as well as their writerly pastiche.

Brenda Ayres is professor of English teaching a wide array of English online courses through Liberty University and Southern New Hampshire University, USA. She has edited several collections of essays including Reinventing Marie Corelli for the Twenty-First Century (2019) with Sarah E. Maier, Victorians and Their Animals: Beast on a Leash (2018) and Biographical Misrepresentations of British Women Writers: A Hall of Mirrors and the Long Nineteenth Century (2017). She is the author of Betwixt and Between: The Biographies of Mary Wollstonecraft (2017).

Sarah E. Maier is professor of English and comparative literature at the University of New Brunswick. Canada, and was named University Teaching Scholar in 2006. She has been working on the Brontës for the bicentennials including for The Lost Manuscripts (2018). Maier’s past work includes Reinventing Marie Corelli for the Twenty-First Century (2019), co-edited with Brenda Ayres. Her other current interests include Sherlock Holmes, Neo-Victorian vampires, adaptation and Neo-Victorian young adult fiction.