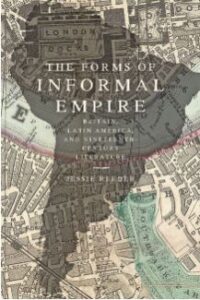 The Forms of Informal Empire

An ambitious comparative study of British and Latin American literature produced across a century of economic colonization.

Spanish colonization of Latin America came to an end in the early nineteenth century as, one by one, countries from Bolivia to Chile declared their independence. But soon another empire exerted control over the region through markets and trade dealings—Britain. Merchants, developers, and politicians seized on the opportunity to bring the newly independent nations under the sway of British financial power, subjecting them to an informal empire that lasted into the twentieth century.

In The Forms of Informal Empire, Jessie Reeder reveals that this economic imperial control was founded on an audacious conceptual paradox: that Latin America should simultaneously be both free and unfree. As a result, two of the most important narrative tropes of empire—progress and family—grew strained under the contradictory logic of an informal empire. By reading a variety of texts in English and Spanish—including Simón Bolívar's letters and essays, poetry by Anna Laetitia Barbauld, and novels by Anthony Trollope and Vicente Fidel López—Reeder challenges the conventional wisdom that informal empire was simply an extension of Britain's vast formal empire. In her compelling formalist account of the structures of imperial thought, informal empire emerges as a divergent, intractable concept throughout the nineteenth-century Atlantic world.

The Forms of Informal Empire goes where previous studies of informal empire and the British nineteenth century have not, offering nuanced and often surprising close readings of British and Latin American texts in their original languages. Reeder's comparative approach provides a new vision of imperial power and makes a forceful case for expanding the archive of British literary studies.

Jessie Reeder is an assistant professor of English at Binghamton University.