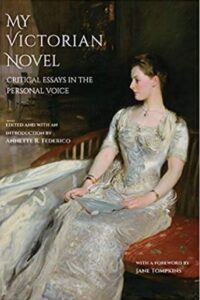 Critical Essays in the Personal Voice

The previously unpublished essays collected here are by literary scholars who have dedicated their lives to reading and studying nineteenth-century British fiction and the Victorian world. Each writes about a novel that has acquired personal relevance to them––a work that has become entwined with their own story, or that remains elusive or compelling for reasons hard to explain.

These are essays in the original sense of the word, attempts: individual and experiential approaches to literary works that have subjective meanings beyond social facts. By reflecting on their own histories with novels taught, studied, researched, and re-experienced in different contexts over many years, the contributors reveal how an aesthetic object comes to inhabit our critical, pedagogical, and personal lives.

By inviting scholars to share their experiences with a favorite novel without the pressure of an analytical agenda, the sociable essays in My Victorian Novel seek to restore some vitality to the act of literary criticism, and encourage other scholars to talk about the importance of reading in their lives and the stories that have enchanted and transformed them.

“What do I think of glory?” * Beverley Park Rilett
On Middlemarch by George Eliot

Annette R. Federico is a professor of English at James Madison University. She is the author of four books, most recently Thus I Lived with Words: Robert Louis Stevenson and the Writer’s Craft, and editor of Gilbert and Gubar’s “The Madwoman in the Attic” after Thirty Years (University of Missouri Press). She lives in Harrisonburg, Virginia.