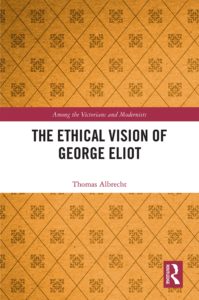 The Ethical Vision of George Eliot

The Ethical Vision of George Eliot is one of the first monographs devoted entirely to the ethical thought of George Eliot, a profoundly significant, influential figure not only in nineteenth-century English and European literature, nineteenth-century women’s writing, the history of the novel, and Victorian intellectual culture, but also in the field of literary ethics. Ethics are a predominant theme in Eliot’s fictional and non-fictional writings. Her ethical insights and ideas are a defining element of her greatness as an artist and novelist.

Through meticulous close readings of Eliot’s fiction, essays, and letters, The Ethical Vision of George Eliot presents an original, complex definition of her ethical vision as she developed it over the course of her career. It examines major novels like Adam Bede, Middlemarch, and Daniel Deronda; many of Eliot’s most significant essays; and devotes two entire chapters to Eliot’s final book Impressions of Theophrastus Such, an idiosyncratic collection of character sketches that Eliot scholars have heretofore generally overlooked or ignored.

The Ethical Vision of George Eliot demonstrates that Eliot defined her ethical vision alternately in terms of revealing and strengthening a fundamental human communion that links us to other persons, however different and remote from ourselves; and in terms of recognizing and respecting the otherness of other persons, and of the universe more generally, from ourselves. Over the course of her career, Eliot increasingly transitions from the former towards the latter imperative, but she also considerably complicates her conception of otherness, and of what it means to be ethically responsible to it.