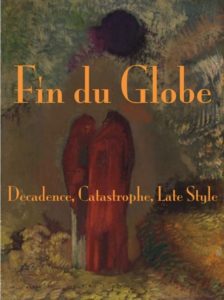 The 3rd Annual Conference of the British Association of Decadence Studies

"I wish it were fin du globe," said Dorian with a sigh. "Life is a great disappointment."

"Ah, my dear," cried Lady Narborough, putting on her gloves, "don't tell me that you have exhausted life. When a man says that one knows that life has exhausted him . . ..”

When Dorian Gray heaved a French sigh over not merely the fin de siècle, but also the end of the planet, could he truly imagine it or the way his own culture was already causing it?  When Baudelaire describes his readers' laying waste to the world with an opiated yawn, how do we take up now his invitation to recognize ourselves in this monstre délicat?  What does it mean for us now to enjoy, teach, and even create Decadent literature, Decadent visual arts, criticism about Decadence, in an age when global warming and climate catastrophes have become our most urgent political crisis?  What are the Decadent art forms and theories that speak to the current century and its numerous catastrophes?  How does Decadence signify differently now, along with other related terms of the fin de siècle such as Aestheticism, Symbolism, Impressionism, and Modernism, as we contemplate our own fin du globe?  How has Decadence figured globally in the political crises and aesthetic migrations of the past two centuries?  This conference will consider the phenomenon of Decadence from its emergence as a social theory and an aesthetic movement in the 19th century to its current resurgence and refiguration in the art and criticism of our present moment and environment.

Decadent De/Generations:  What has this generation inherited from the Decadent Movement?  How has Decadence imagined "catastrophe" in the sense of disaster, of degeneration, disintegration, apocalypse, extinction?  What, if anything, comes after Decadence and its catastrophes?  What overtures do they make?

The Ends of the World:  When Baudelaire writes of the ships coming from the ends of the world (du bout du monde) to satisfy our every desire, when Pater writes of the head of the Mona Lisa upon which all the ends of the world are come, we might suppose, however counterintuitively, that the surface of a globe can have a spatial beginning, an end, even multiple ends, a center, a periphery, even a north, south, east, and west.  How does Decadence conceive the global, the global empire, or for that matter its various political "ends"?  How cosmopolitan are its aesthetes?  How does it migrate across various borders and various oceans?  When does it ever arrive at the ends of its worlds, and how does it return?

Decadence and Eco-criticism:  Are there really Flowers of Evil?  Romantic poetry lends itself well to eco-criticism, but what about the literature we call Decadent, which may or may not always valorize all that is artificial, destructive, luxurious, and "against nature"?  How does environmentalism invite us to rethink Decadence, and vice versa, whether in the 19th century, the 20th, or now?  How do we conceive of pleasure and excess at the end of a world?  Is Decadence, or its critique, a luxury we could never afford?

Decadent Modernity:  Decadence is a theory of the fall of empires, and Ancient Rome is chief among them.  As Oscar Wilde wrote, however, "Nero and Narcissus are always with us," and the insight is and has been instructive for just about every capital in the modern world.  How is Decadence a theory of modernity, about the ends of our own civilizations, about British or French imperialism, or about American or Asian cultural hegemony and decline?  How do Decadent endings figure in the styles we call modernist, or postmodernist, or whatever has come after?

Decadent Endings:  Considering "catastrophe" in the literary sense as the unraveling or denouement of a drama, what is distinctive about the endings of Decadent texts, Decadent events, Decadent careers, Decadent lives, or Decadent civilizations?  What is or was modern or modernist about Decadent conclusions?

Late Style:  Formal considerations of style when time has run out:  Baudelaire or Verlaine or Huysmans on the style d'or at the end of empires, the crepuscular Debussy, late James, Wilde after the trials, Aschenbach at the beach, Don Fabrizio at the ball, time regained in Proust, final cigarettes in film noir, Djuna Barnes or Jean Rhys or Lawrence Durrell or Tennessee Williams or Thomas Pynchon or Martin Amis after the lover has left in a taxi, you see where this is going.

What is Neo-Decadence?  A paradox, for starters, but what exactly are the aesthetic forms of Decadence in the present siècle?  How do they evoke the styles, themes, and ironies of the Decadent Movement of the 19th century?  Why this return, why this departure?  Why is J.-K. Huysmans turning up in novels by Michel Houellebecq and D. B. C. Pierre?  Why are there new movies or plays about Colette, Sarah Bernhardt, Oscar Wilde?  What is Neo and Decadent about Drowning in Beauty:  The Neo-Decadent Anthology?

SEMINARS:  There will be a Keynote Lecture, but also a series of Keynote Seminars, open discussions on a Decadent text, each led by a distinguished critic in the field who has been invited to choose and introduce an important text.  Seminar topics will be announced soon.  In lieu of speaking on a panel, participants may choose instead to write a 3-5 pp. response essay for a seminar.  These essays will be made available to registered participants in advance online, with authors' names and essay titles listed as presentations on the conference agenda.  Space in these seminars will be limited so that we can have an intense and intimate conversation.  Participants who propose an essay for the seminar will be admitted in the order they apply, but other participants will be admitted as space permits.  If you wish to write for a seminar, please submit a paragraph abstract with title for the seminar of your choice by February 1 and submit your essay by August 1; otherwise, if you are not writing for the seminar, please reserve a place by August 1.  You may participate in as many seminars as you like, if there is space at the table for you.

Please send queries and abstracts to Ellis Hanson at eh36@cornell.edu by March 1, 2020