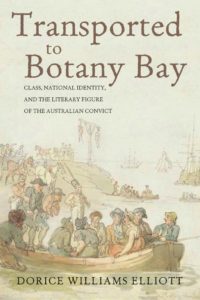 Class, National Identity, and the Literary Figure of the Australian Convict

Literary representations of British convicts exiled to Australia were the most likely way that the typical English reader would learn about the new colonies there. In Transported to Botany Bay, Dorice Williams Elliott examines how writers—from canonical ones such as Dickens and Trollope to others who were themselves convicts—used the figure of the felon exiled to Australia to construct class, race, and national identity as intertwined.

Even as England’s supposedly ancient social structure was preserved and venerated as the “true” England, the transportation of some 168,000 convicts facilitated the birth of a new nation with more fluid class relations for those who didn’t fit into the prevailing national image. In analyzing novels, broadsides, and first-person accounts, Elliott demonstrates how Britain linked class, race, and national identity at a key historical moment when it was still negotiating its relationship with its empire. The events and incidents depicted as taking place literally on the other side of the world, she argues, deeply affected people’s sense of their place in their own society, with transnational implications that are still relevant today.

Dorice Williams Elliott is associate professor and Conger-Gabel Teaching Professor at the University of Kansas in the Department of English. In addition to her 2002 book, The Angel out of the House: Philanthropy and Gender in Nineteenth-Century England, she has published articles on Jane Austen, Elizabeth Gaskell, servants in literature, gift theory, and other topics.