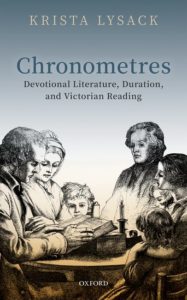 Krista Lysack
What does it mean to feel time, to sense its passing along the sinews and nerves of the body as much as the synapses of the mind? And how do books, as physical objects, mediate such temporal experiences? Chronometres: Devotional Literature, Duration, and Victorian Reading is a study of the time-inflected reading practices of religious literature, the single largest market for print in Victorian Britain. It examines poetic cycles by John Keble, Alfred Tennyson, Christina Rossetti, and Frances Ridley Havergal; family prayer manuals, Sunday-reading books and periodicals; and devotional gift books and daily textbooks. Designed for diurnal and weekly reading, chronometrical literature tuned its readers' attentions to the idea of spiritual transcendence and the promise of the hereafter, but only in so far as it parcelled out reading into discrete increments that resembled the new industrial time-scales of factories and railway schedules. Chronometres takes up print culture, affect theory, and the religious turn in literary studies in order to explore the intersections between devotion and the condition of modernity. It argues that what defines Victorian devotional literature is the experience of its time signatures, those structures of feeling associated with its reading durations.
For many Victorians, reading devotionally increasingly meant reading in regular portions and often according to the calendar and work-day in contrast to the liturgical year. Keeping pace with the temporal measures of modernity, devotion became a routinized practice: a way of synchronizing the interior life of the spirit with the exigencies of clock time. Chronometres considers how the deliverances afforded through time-scaled reading are persistently materialized in the body, both that of the book and of the reader. Recognizing that literature and devotion are not timeless abstractions, it asks how the materiality of books, conceived as horological relationships through reading, might bring about the felt experience of time. Even as Victorian devotion invites us to tarry over the page, it also prompts the question: what if it is 'Eternity' that keeps time with the clock?
Krista Lysack is Associate Professor of English at King's University College at the University of Western Ontario (Western University). She is the author of Come Buy, Come Buy: Shopping and the Culture of Consumption in Victorian Women's Writing (2008) and of various essays on Victorian literature and culture.
Order online at:  https://global.oup.com/