Sean Grass, The Commodification of Identity in Victorian Narrative 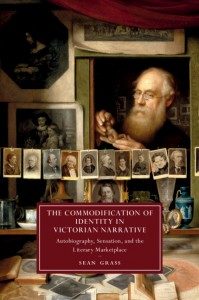 The Commodification of Identity in Victorian Narrative

Scholars of the Victorian period have often written of it as a golden age of autobiography, notable for the remarkable proliferation of life writing at and after mid-century. In 1850 Leigh Hunt published his Autobiography, and Robert Southey’s Recollections appeared that same year in his posthumous Life and Correspondence. Thereafter, many other eminent Victorians—Charles Darwin, William Gladstone, Harriet Martineau, John Stuart Mill, John Henry Newman, Margaret Oliphant, John Ruskin, and Anthony Trollope, to name just a few—wrote and published accounts of their lives. Around mid-century, the impulse to self-narration also began to shape much imaginative literature, in novel such as Jane Eyre (1847), Margaret Maitland (1849), David Copperfield (1849-50), and Alton Locke (1850), and in poetic memoirs such as The Prelude (1850), In Memoriam, A.H.H. (1850), and Aurora Leigh (1856). We might read this spectacular profusion of first-person works as a culmination of particular aesthetic concerns, for instance as evidence of the maturation of writers who had been raised on the Romantic ideals of introspection and artistic self-revelation. But it seems likely that something more mundane was at work—the something that prompted a consummate businessman like Dickens to write David Copperfield and expect it to sell.

The Commodification of Identity in Victorian Narrative: Autobiography, Sensation, and the Literary Marketplace explores this “something,” drawing heavily from the business records of Victorian publishers, the Nineteenth-Century Short Title Catalog, contemporary reviews of life writing, and other materials to illustrate the extent to which this familiar outpouring of real and imagined lives at mid-century depended upon the hundreds of autobiographies that had come before, and that had made life writing into a popular, profitable, and deliberately commodified part of the early nineteenth-century literary market. For each famous autobiography that came later in the century, there was first a Memoir of the Rev. Henry Martyn (1819), a Narrative of the Life and Travels of a Serjeant B— (1823), and a Horrid Confession of John Kean (1825). For each famous autobiography that remains a familiar object of scholarly study, scores of others have vanished into obscurity, though they helped early in the century to produce a reading culture hungry for autobiographical disclosures and willing to sanction new relations between identity, textuality, and economic exchange. These forgotten works need not become objects of close analysis, but they do not belong to a separate literary past.

On the contrary, as I demonstrate in my opening chapter, autobiography matured alongside baggy monsters into a characteristic form of Victorian prose. Between 1820 and 1860, autobiographies became more numerous and more commercial. They passed from being quiet works for niche audiences to being very big business, sought, published, and sold by the very leviathan houses that also published Dickens, Eliot, Collins, Thackeray, and Trollope. And this change occurred within a wider field of financial practices, copyright laws, portraiture, photography, census-taking, and civil-service examinations that were insisting generally on textualizing Victorian identity and transforming it into an object of economic exchange. The effect, as I show in chapters on Great Expectations, Lady Audley’s Secret, Silas Marner, Very Hard Cash, Our Mutual Friend, and The Moonstone, was to make the textualization and commodification of identity—the imaginative and ideological collapse of conceptual boundaries between property and identity—a crucial, recurrent trope in the mid-century novel.

Sean Grass is Professor of English at the Rochester Institute of Technology and is the author of The Self in the Cell: Narrating the Victorian Prisoner (2003), Charles Dickens's 'Our Mutual Friend': A Publishing History (2014), and several essays on Victorian literature and culture. He received two awards from the National Endowment for the Humanities in support of the current work.