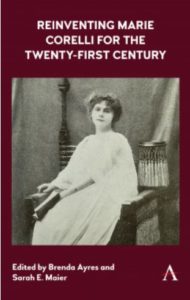 ‘Reinventing Marie Corelli for the Twenty-First Century’ is a collection of essays about a novelist who once was the ‘second most famous Englishwoman in the world’ after Queen Victoria and whose books broke every previous sales record. The essays account for Corelli’s popularity and reintroduce her to a new generation of readers.

With the purpose of introducing Marie Corelli to a new generation of readers and of reconsidering her works for generations familiar with them, ‘Reinventing Marie Corelli for the Twenty-First Century’ demonstrates how provocative Corelli was as a public figure and how controversial and paradoxical were the views about womanhood and the supernatural pitched in her novels. This collection of original essays focuses on three major battles that engaged Corelli: her personal and public contentions, her mercurial constructions of gender and resistance to the New Woman modality and her untenable reconciliation of science with the supernatural. Corelli was often fighting several fronts at the same time; she rarely was not at war with someone including herself.

Brenda Ayres teaches graduate and undergraduate programs in English, professional writing and education at Liberty University in Lynchburg, Virginia, USA. She has published extensively on eighteenth- and nineteenth-century literature with her most recent being Victorians and Their Animals: Beast on a Leash (2018), Biographical Misrepresentations of British Women Writers: A Hall of Mirrors and the Long Nineteenth Century (2017) and Betwixt and Between: The Biographies of Mary Wollstonecraft (2017). Ayres has also published articles on Corelli in several edited volumes including Silent Voices: Forgotten Novels by Victorian Women Writers (2003).

Sarah E. Maier teaches English & Comparative Literature at the University of New Brunswick, Canada. She has published scholarly editions of Thomas Hardy’s Tess of the D’Urbervilles, Bram Stoker’s The Lady of the Shroud as well as articles on the work of J. M. Barrie, C. Bronte, E. D’Arcy, G. Eliot, J. K. Rowling, M. Wollstonecraft and others. The recipient of several teaching awards including the Dr. Allan P. Stuart Award for Excellence in Teaching (2003), Maier was appointed University Teaching Scholar in 2006.