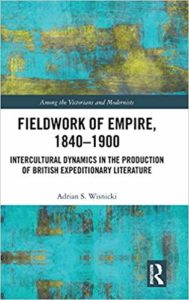 Intercultural Dynamics in the Production of British Expeditionary Literature

Adrian S. Wisnicki is an Associate Professor of English at the University of Nebraska-Lincoln and Faculty Fellow of the university’s Center for Digital Research in the Humanities. He holds a Ph.D. in English from the Graduate Center of the City University of New York. He currently directs Livingstone Online (livingstoneonline.org), a major peer-reviewed digital humanities project funded by the National Endowment for the Humanities. Print publications include Conspiracy, Revolution, and Terrorism from Victorian Fiction to the Modern Novel (Routledge, 2008), and articles in Victorian Studies, Studies in Travel Writing, History in Africa, Journal of Colonialism and Colonial History, and elsewhere.

Jeffrey A. Auerbach, Imperial Boredom: Monotony and the British Empire →