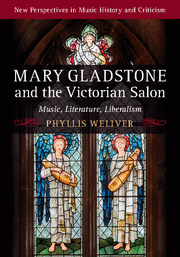 Mary Gladstone and the Victorian Salon

The daughter of one of Britain's longest-serving prime ministers, Mary Gladstone was a notable musician, hostess of one of the most influential political salons in late-Victorian London, and probably the first female prime ministerial private secretary in Britain. Pivoting around Mary's initiatives, this intellectual history draws on a trove of unpublished archival material that reveals for the first time the role of music in Victorian liberalism, explores its intersections with literature, recovers what the high Victorian salon was within a wider cultural history, and shows Mary's influence on her father's work. Paying close attention to literary and biographical details, the book also sheds new light on Tennyson's poetry, George Eliot's fiction, the founding of the Royal College of Music, the Gladstone family, and a broad plane of wider British culture, including political liberalism and women, sociability, social theology, and aesthetic democracy.

Part I. Intellectual History: 1. Idealist philosophy, culture and the Gladstones; 2. The passion of liberalism; 3. The Victorian salon; 4. Music and the Gladstone salon; Part II. Musical and Literary Case Studies: 5. Mary Gladstone's diary and the Royal College of Music; 6. ‘there ought to be some melody in poetry': Tennyson's salon readings; 7. ‘musical, I see!': Triangulated listening and Daniel Deronda; 8. Conclusion.

Phyllis Weliver is a Professor of English at Saint Louis University and a Fellow of Gladstone’s Library in Wales. Her research explores literature and music in Victorian Britain as mutually constitutive with a range of nineteenth-century discourses, including constructions of gender, class, childhood, ethnicity, and political and religious identity.