Renata Kobetts Miller, The Victorian Actress in the Novel and on the Stage

The Victorian Actress in the Novel and on the Stage 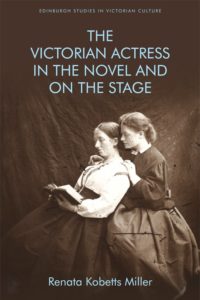 Examines representations of the actress in Victorian novels and theatres

This book analyses how Victorian novels and plays used the actress, a significant figure for the relationship between women and the public sphere, to define their own place within and among genres and in relation to audiences. Providing new understandings of how the novel and theatre developed, Miller explores how their representations shaped the position of the actress in Victorian culture with regard to her authenticity, her ability to foster sympathetic bonds, and her relationships to social class and the domestic sphere. The book traces how this cultural history led actresses to appropriate the pen themselves by becoming suffragette playwrights, thereby writing new social roles for women.

Renata Kobetts Miller is professor of English and deputy dean of Humanities and the Arts at the City College of New York. She is the author of a book on reinterpretations of Dr. Jekyll and Mr. Hyde. Her work on the Victorian novel and the theater has appeared in the Oxford Handbook of Adaptation Studies, MLQ and BRANCH, among other publications.