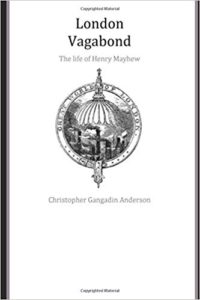 The Life of Henry Mayhew

London Vagabond tells the story of Henry Mayhew, the author of ‘London Labour and the London Poor’, which gave life and substance to the voices of the poor, the outcast and the labouring Londoners of the 19th century. Born into a wealthy family, Mayhew’s public school years were cut short and he was shipped off to Calcutta as a midshipman. Taken on at his father’s law firm upon his return, he soon left when he accidentally got his father arrested. He became a journalist and dramatist in 1830s London, neither considered respectable occupations, and he crowned the decade by founding Punch. It became the most successful magazine of the century and should have set him up for life. Instead, his path led to bankruptcy and prison. He spent years in exile, in Guernsey and in Germany. In between he became famous for his revelations about the poor and brought out ‘London Labour and the London Poor’ in 1851. He was a respected children’s author, a popular comic novelist, a criminologist who gave evidence to Parliamentary Select committees and a war correspondent. He wrote for the stage, tried to enter politics as, the darling of both radicals and conservatives for attacking the liberal mantra of Free Trade. He was known as a philosopher, and as a scientist, who revered his friend Michael Faraday, and sought to bring electric lighting to London decades before it arrived. Mental illness haunted him, his periodic peaks switching to deep troughs. He mixed with Dickens, Thackeray and stood at the centre of the burgeoning literary world, met with government ministers to advocate social reforms, and mingled with costers, dockers and the underworld too, keeping an open house for thieves and paroled prisoners. His closeness to some of them backfired in blackmail and death threats. His wife, who dealt with the bailiffs for him and secretly co-wrote much of his work, left him when their children had grown up and insisted on being buried under her maiden name. Forgotten, he spent his last decades moving from one Bloomsbury bedsit to another, plotting new schemes, new books, until the last. When Mayhew died in 1887 one newspaper noted that, ‘The chief impression created in the public mind by the announcement of the death of Henry Mayhew, was one of surprise that he should still be alive’. Yet, nearly forty years earlier, his ‘London Labour’ had gripped the country. It only began to resurface after the second world war, when the London Mayhew had loved lay in ruins. By the late 1960s, a full version of London Labour was available once more, riding the wave of a Victoriana revival. By the 1970s academics fought over his legacy; for the left Mayhew was a proto-Marxist; for the right he was a debunker of progressive myths about the poor, and a dilettante; for others his London Labour was simply a wonder. ‘It is a book’, wrote W. H. Auden, ‘in which one can browse for a lifetime without exhausting its treasures.’ From the 1980s it was a fixture on courses on literature, history, criminology, culture studies and more, with Mayhew feted in schools as a philanthropist. London Labour continues to inspire writers and filmmakers who seek to understand and show the reality of Victorian poverty. The historian E. P. Thompson observed ‘he was the subject of no biography and there is something like a conspiracy of silence about him in some of the reminiscences and biographies of his contemporaries [...] Mayhew remains a puzzling character, and some final clue seems to be missing.’ Although Terry Pratchett dedicated his last novel, Dodger, to Mayhew, the character of the real Henry Mayhew has remained obscure, until now.

Christopher Gangadin Anderson was born and lives in London. He read History at Gonville & Cauis College, Cambridge, subsequently becoming a lawyer and a user experience designer. He is also a freelance historian, who edited the Penguin Little Black Classic about Mayhew, 'On Street Piemen', and has written on Mayhew for a number of London history blogs. For more information, visit http://londonlabourlondonpoor.com/