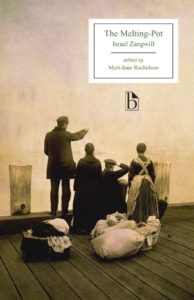 Israel Zangwill, an Anglo-Jewish author and son of immigrants, wrote The Melting-Pot to demonstrate how immigrants could become good American citizens, hoping to forestall the kinds of restrictions—particularly against Russian Jews—that had been enacted in his home country. In 1908, when the play first appeared on an American stage, many Americans feared that these particular newcomers would unalterably change the nation’s character. Politicians and others called for restricted immigration and stringent tests for citizenship. The Melting-Pot did not prevent the US government from enacting immigration restrictions in 1924, but it became Zangwill’s most popular and most continuously performed play, and it popularized a metaphor for America—the melting pot—that has been discussed and debated ever since.

This edition presents the play in its historical context, with readings from the time on immigration and intermarriage, as well as the settlement house movement and the Kishinev pogrom, which both figure prominently in the drama. Excerpts from the many and diverse reviews of the play highlight why it was so controversial.