Veronica Alfano, The Lyric in Victorian Memory: Poetic Remembering and Forgetting from Tennyson to Housman 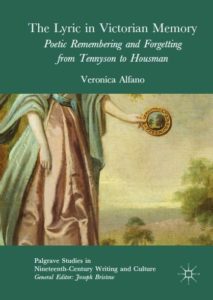 The Lyric in Victorian Memory

Poetic Remembering and Forgetting from Tennyson to Housman

This is a study of Victorian poems that recall, yearn for, fixate on, and forget the past. Bringing together formalist and historicist approaches, its close readings trace the complex interactions among memory as a theme, cultural nostalgia for lyric, and memorable formal traits (such as brevity and repetition) in the poetry of Alfred Tennyson, Christina Rossetti, Arthur Symons, and A. E. Housman. Alfano demonstrates that the amnesia-inflected version of remembrance depicted and enacted in Victorian verse sheds new light on the relationships between lyric and narrative and between gender and genre, as well as on nineteenth-century attitudes toward a past that seemed increasingly distant and inaccessible. She argues that lyrical reminiscence reflects Victorians' simultaneous detachment from and longing for time gone by.

Veronica Alfano is Assistant Professor at Delft University of Technology and Research Fellow at Australian Catholic University. She is the co-editor (with Andrew Stauffer) of Virtual Victorians: Networks, Connections, Technologies.

← The Body and the Page in Victorian Culture CFP