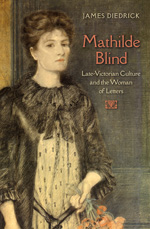 Late-Victorian Culture and the Woman of Letters

Born to politically radical parents, Blind had, by the time she was thirty, become a pioneering female aesthete in a mostly male community of writers, painters, and critics, including Algernon Charles Swinburne, William Morris, Ford Madox Brown, William Michael Rossetti, and Richard Garnett. By the 1880s she had become widely recognized for a body of writing that engaged contemporary issues such as the Woman Question, the forced eviction of Scottish tenant farmers in the Highland Clearances, and Darwin’s evolutionary theory. She subsequently emerged as a prominent voice and leader among New Woman writers at the end of the century, including Mona Caird, Rosamund Marriott Watson, and Katharine Tynan. She also developed important associations with leading male decadent writers of the fin de siècle, most notably, Oscar Wilde and Arthur Symons.

Despite her extensive contributions to Victorian debates on aesthetics, religion, nationhood, imperialism, gender, and sexuality, however, Blind has yet to receive the prominence she deserves in studies of the period. As the first full-length biography of this trailblazing woman of letters, Mathilde Blind underscores the importance of her poetry and her critical writings (her work on Shelley, biographies of George Eliot and Madame Roland, and her translations of Strauss and Bashkirtseff) for the literature and culture of the fin de siècle.

James Diedrick, Professor of English at Agnes Scott College, is the author of Understanding Martin Amis.