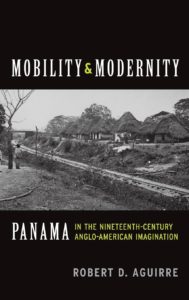 Panama in the Nineteenth-Century Anglo-American Imagination

Mobility and Modernity: Panama in the Nineteenth-Century Anglo-American Imagination rewrites the history of the Panama Canal, assessing for the first time the literary culture of the preceding decades. In this period, U.S. and British writers and visual artists developed sophisticated languages of mobility, time, and speed to cast the isthmus as an in-between place, a point of connection to more important destinations. These discourses served an important role in their own day and laid the imaginative ground for the canal to come.

In this study, Robert D. Aguirre provides bold new interpretations of Anthony Trollope, John Lloyd Stephens, and Eadweard Muybridge and also recovers information about literary communities previously lost to history. Mobility and Modernity shows how Panama became defined as a site of incipient globalization and a crucial link of empire. Across this narrow strip of land people and things traveled, technology developed, and political forces erupted. The isthmus became a site of mobility that paradoxically produced varieties of immobility. Parting ways with histories that celebrate the canal as a mighty engineering feat, Mobility and Modernity reveals a more complex story of cultural conflict that began with the first gold rush news in the late 1840s and continued throughout the century.