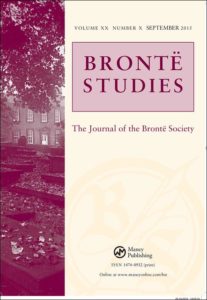 In early critical appraisals of the Brontës’ writings, accusations of ‘coarseness’ appear frequently. Although Jane Eyre (1847) was an instant bestseller, Elizabeth Rigby famously attacked the book as ‘coarse’ and accused Charlotte of ‘moral Jacobinism’. Likewise, Anne’s second novel, The Tenant of Wildfell Hall (1848), was also criticised as ‘coarse’ and ‘brutal’ in both subject matter and moral outlook, and perceived as an ‘entire mistake’ by Charlotte. An anonymous review of Wuthering Heights (1847) chastised Emily’s characters as ‘coarse’ and violent ‘savages’ who were ‘ruder than those who lived before the days of Homer’. And, according to Daphne du Maurier, Branwell Brontë was ‘fascinated’ by and befriended many men who were ‘a law unto themselves, rowdy, rough, coarse’.

More recently, Lucasta Miller has addressed the ubiquity of this word within Brontë studies, writing that the ‘“coarseness” to which so many critics objected was a catch-all moralistic term which encompassed a range of elements considered unfeminine and indecorous’ (The Brontë Myth, 2001). While the formal definition of ‘coarse’ indicates that its meaning is associated with a wide range of seemingly obtuse and offensive values that extend across social markers (including gender, sexuality, race, and class), the accusation of coarseness levelled at the Brontës may have differed to our current understanding of the term.

This Special Issue of Brontë Studies provides space to critically re-appraise notions of coarseness in its widest sense in relation to the entire Brontë family. How and in what ways does ‘coarseness’ manifest in and across the lives and works of the Brontë family? What did it mean to be labelled ‘coarse’ in the early to mid-nineteenth century? And how have shifting meanings of what constitute ‘coarse’ expanded and/or changed our understanding and reading of the family’s lives and works?

Submissions are invited of original journal articles of no more than c. 6,000 words (including abstract, notes, images and references) to the guest editors, Sophie Franklin (Sophie.r.franklin@durham.ac.uk) and Claire O’Callaghan (Claire.Ocallaghan@brunel.ac.uk). The deadline for the submission of original articles is 1 December 2017. All submissions will be subject to peer review. For guidance on the preparation of articles, please refer to the journal’s ‘Instructions for Authors’ information available at: http://www.tandfonline.com/action/authorSubmission?journalCode=ybst20&page=instructions. Please contact the guest editors with any queries.

Jonathan Farina, Everyday Words and the Character of Prose in Nineteenth-Century Britain →